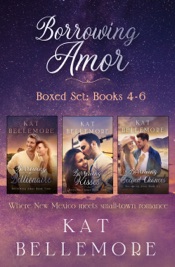 Space tourism, Carlsbad Caverns, and a road trip mix with a billionaire, a real estate developer, and an unlikely love.
Each can be read as a stand-alone novel.

Sometimes to find love, you need a little space.

Bev Miller is shocked when she wins a seat on Galactic Enterprise’s inaugural space tourism flight, considering she never entered her name into the drawing. But thanks to her best friend, Bev finds herself at a spaceport, preparing for the adventure of a lifetime. Unfortunately, that includes Charles Michael. Handsome, single, and rich—he’s everything she’s cut herself off from. After her stint with homelessness, she has no desire to date someone who represents her old life, when she too had wealth.

Charles Michael thought rising from rags to riches would solve all of his problems, but now that his parents’ bills are paid off, the money is nothing but an anchor around his neck. He reserves a seat on a space tourism flight in hopes it will help him figure out his life—to give him perspective without distractions. He didn’t count on meeting Bev Miller.

Bev and Charles have only three days to shed their prejudices and learn to trust. Will their return to earth mean the beginning of a new adventure?

He’s a real estate developer who has a job to do. She’s the one who is going to stop him.

As the mayor’s assistant, Zoe Flores has had a front row seat to how quickly the small town of Amor has changed. So when she’s assigned to help real estate developer Stephen McAllister replace several local businesses with high-class stores, she plots to save Amor and drive Stephen out of town.

When Stephen shows up in Amor, the only thing he wants to do is buy out the properties on his list, then get out—all before the local residents realize what he’s up to. He didn’t plan on the mayor assigning his beautiful, and feisty, assistant as his liaison. Now he’ll be lucky to get anything done with her thwarting his every move.

Stephen and Zoe try to fight their growing attraction to each other, but can they put aside their differences long enough to give love a fighting chance?

No one told them that their ex would be on this trip.

When Debbie Allred is asked by the new mayor of Amor to go on a one-week recruiting trip, she is thrilled. This would be a chance to earn extra money while utilizing her skills as a business owner and a member of the town council. But it isn’t until after Debbie agrees to the job that she discovers the mayor didn’t give her all of the important details—specifically that Debbie’s ex-boyfriend would be heading the recruiting trip.

Bob Larcher is not a people person. At. All. He loves rules and procedure, which means he’s great at his job at Town Hall, but there is one item in his job description he’d overlooked. Job Recruitment. When he discovers that he’ll be traveling with his ex-girlfriend for an entire week, he’s not sure if he should be ecstatic, or terrified.